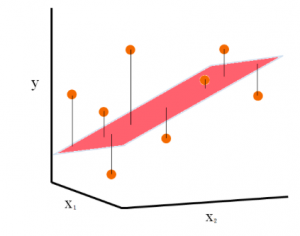 What is Linear Regression?

Linear regression is a machine learning concept that is used to build or train the models (mathematical models or equations)  for solving supervised learning problems related to predicting continuous numerical value. Supervised learning problems represent the class of the problems where the value (data) of the independent or predictor variable (features) and the dependent or response variables are already known. The known values of the dependent and independent variable (s) are used to come up with a mathematical model/formula also called as regression equation which is later used to predict / estimate output given the value of input features. In machine learning tasks, linear regression is mostly used for making the prediction of numerical values from a set of input values. The following is an example of linear univariate linear regression analysis representing the relationship between the height and weight in adults using the regression line. The regression line is superimposed over the scatterplot of height vs weight to showcase the linear relationship. 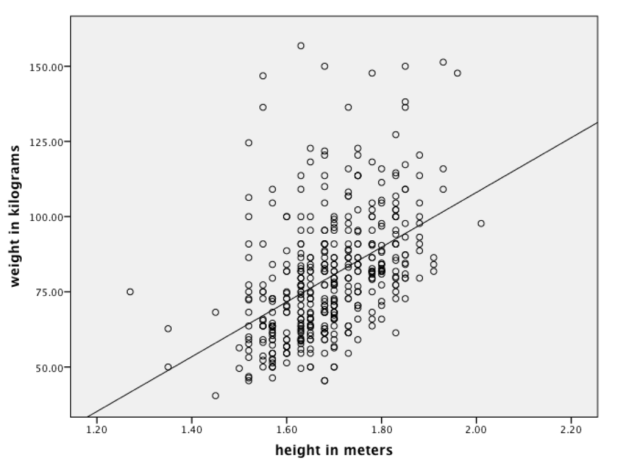 The linear regression mathematical structure or model assumes that there is a linear relationship between input and output variables. In addition, it is also assumed that the noise or error is well-mannered (normal or Gaussian distribution). Building linear regression models represents determining the value of output (dependent/response variable) as a function of the weighted sum of input features (independent / predictor variables).  This data is used to determine the most optimum value of the coefficients of the independent variables.

Let’s say, there is a numerical response variable, Y, and one or more predictor variables X1, X2, etc. And, there is some relationship between Y and X that can be written as the following:

Where \(Y_i\) is the actual or observed value and  f is some fixed but unknown function of X1 and X2 which is used to come up with predicted value \(\hat{Y_i}\). The difference between the actual or observed value, \(Y_i\) and the predicted value, \(\hat{Y_i}\) is called as the error or residual. When the unknown function is a linear function of X1 and X2, the Y becomes a linear regression function or model such as the following. Note that the error term averages out to be zero.

In the above equation, different values of Y and X1, and X2 are known during the model training phase. As part of training the model, the most optimal value of coefficients b1, b2, and b0 are determined based on the least square regression algorithm. The least-squares method is an algorithm to find the best fit for a set of data points by minimizing the sum of the squared residuals or square of error of points (actual values representing the response variable) from the points on the plotted curve (predicted value). This is shown below.

If \(Y_i\) is the ith observed value and \(\hat{Y_i}\) is the ith predicted value, then the ith residual or error value is calculated as the following:

The residual sum of squares can then be calculated as the following:

In order to come up with the optimal linear regression model, the least-squares method as discussed above represents minimizing the value of RSS (Residual sum of squares).

There are two different types of linear regression models. They are the following:

As shown above, simple linear regression models comprise of one input feature (independent variable) which is used to predict the value of the output (dependent) variable. The following mathematical formula represents the regression model:

where \(Y_i\) represents the observed value. Let’s take an example comprising one input variable used to predict the output variable. However, in real life, it may get difficult to find a supervised learning problem that could be modeled using simple linear regression.

However, let’s assume for the sake of understanding that the marks of a student (M) do depend on the number of hours (H) he/she put up for preparation. The following formula can represent the model:

Marks = function (No. of hours)

The best way to determine whether it is a simple linear regression problem is to do a plot of Marks vs Hours. If the plot comes like below, it may be inferred that a linear model can be used for this problem. 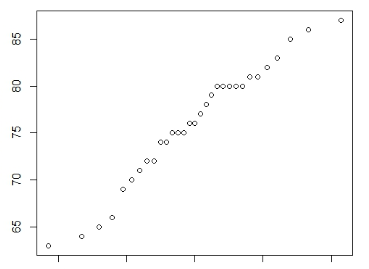 The data represented in the above plot would be used to find out a line such as the following which represents a best-fit line. The slope of the best-fit line would be the value of “m”. 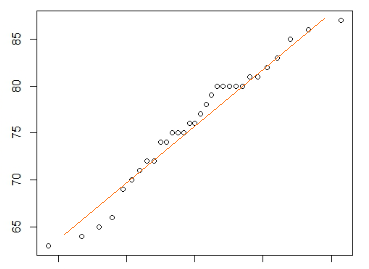 Multiple linear regression can be used to model the supervised learning problems where there are two or more input (independent) features that are used to predict the output variable. The following formula can be used to represent a typical multiple regression model:

In the above example, \(Y_i\) represents the observed value, and X1, X2, and X3 represent the input features. The model (mathematical formula) is trained using training data to find the optimum values of b0, b1, b2, and b3 which minimizes the objective function (mean squared error).

The problem of predicting weight reduction in form of the number of KGs reduced, hypothetically, could depend upon input features such as age, height, the weight of the person, and the time spent on exercises, .

As part of training the above model, the goal would be to find the value of b1, b2, b3, b4, and b0 which would minimize the objective function. The objective function would be the summation of mean squared error which is nothing but the sum of the square of the actual value and the predicted value for different values of age, height, weight, and timeOnExercise.

The following are some key terminologies in relation to measuring the residuals and performance of the linear regression models:

The following represents some real-world examples / use cases where linear regression models can be used:

Here are some of my other posts in relation to linear regression:

I have been recently working in the area of Data analytics including Data Science and Machine Learning / Deep Learning. I am also passionate about different technologies including programming languages such as Java/JEE, Javascript, Python, R, Julia, etc, and technologies such as Blockchain, mobile computing, cloud-native technologies, application security, cloud computing platforms, big data, etc. For latest updates and blogs, follow us on Twitter. I would love to connect with you on Linkedin. Check out my latest book titled as First Principles Thinking: Building winning products using first principles thinking
Posted in AI, Data Science, Machine Learning. Tagged with ai, artificial intelligence, Data Science, machine learning.