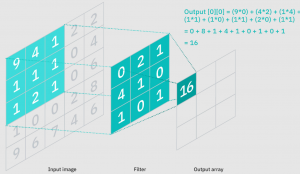 Convolutional neural networks (CNNs) are a type of deep learning algorithm that has been used in a variety of real-world applications. CNNs can be trained to classify images, detect objects in an image, and even predict the next word in a sentence with incredible accuracy. CNNs can also be applied to more complex tasks such as natural language processing (NLP). CNNs are very good at solving classification problems because they’re able to identify patterns within data sets. This blog post will explore some CNN applications and discuss how CNN models can be used to solve real-world problems.

Before getting into the details of CNN applications, let’s quickly understand what are CNNs?

What is a Convolutional Neural Network (CNN)?

CNNs work by using layers with filters placed along each dimension (horizontal or vertical) capturing specific information about the visual field. In 1982, Fukushima worked on visual cortex modeling by building a neural network that worked the same way as the human brain, based on the following two concepts. A. Neurons are replicated across the visual field. B. There are complex cells that pool the information from simple cells (orientation-selective units). As a result, the shift of the picture will change the activation of simple cells, but will not influence the integrated activation of the complex cell (convolutional pooling). In CNN, a small input window is swiped over the whole image. If the input window gets activated, a particular pattern is identified. Yan Lecun in 1990 first trained the CNN for handwritten digits recognition based on Fukushima’s work on visual cortex modeling (simple/complex cells hierarchy) and using backpropagation.

How are the convolutional neural networks trained?

The first-layer, simple convolution/pool combinations usually detect simple features, such as oriented edge detections. During the forward pass, the filter is slid (more precisely, convolve) across the width and height of the input volume, and dot products between the entries of the filter and the input at any position are computed. As the filter is slid over the width and height of the input volume, a 2-dimensional activation map is produced that gives the responses of that filter at every spatial position. The CNN learn filters that activate when they see some type of visual features such as an edge of some orientation or a blotch of some color on the first layer, or eventually entire honeycomb or wheel-like patterns on higher layers of the network. After the first convolution/pool layer, the objective is to detect combinations of features from previous layers. Here is a great read on the convolutional neural networks (CNN).

The diagram below represents the convolutional filter along with the input image. 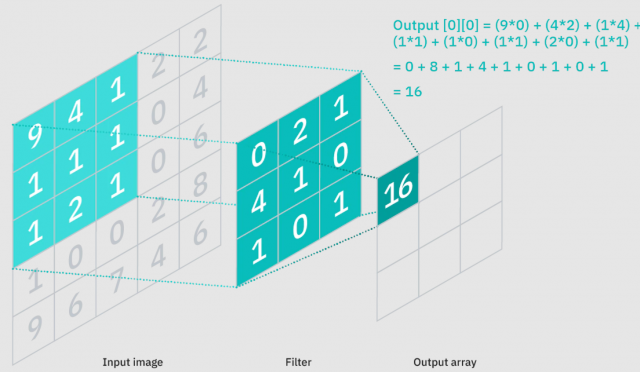 Pooling layers are important to Convolutional Neural Networks. They help to reduce computational overhead and increase the receptive fields of proceeding convolutional operations. They aim to produce downsampled volumes that closely resemble the input volume while, ideally, also being computationally and memory efficient.

The most common form of a ConvNet architecture stacks a few CONV-RELU layers (as shown in below diagram), follows them with POOL layers, and repeats this pattern until the image has been merged spatially to a small size. At some point, it is common to transition to fully-connected layers. The last fully-connected layer holds the output, such as the class scores. The image below represents the convolutional neural network including convolutional layers, polling layer.

Check out some of the my following posts on CNN:

Convolutional neural networks (CNNs) are remarkably successful in many computer vision tasks. Here are some real-world applications of CNN:

CNN has been used in a variety of real-world applications, including cancer detection and biometric authentication. CNN can also be applied to visual question answering or image captioning where CNN networks take an input image and generate natural language answers about that image. CNNs have even been able to summarize documents based on their content by identifying key points within those documents. If you want to learn more about CNNs, there are many CNN-based projects on GitHub that you can use to build CNN models for your own applications. Alternatively, feel free to reach out to us via email.

I have been recently working in the area of Data analytics including Data Science and Machine Learning / Deep Learning. I am also passionate about different technologies including programming languages such as Java/JEE, Javascript, Python, R, Julia, etc, and technologies such as Blockchain, mobile computing, cloud-native technologies, application security, cloud computing platforms, big data, etc. For latest updates and blogs, follow us on Twitter. I would love to connect with you on Linkedin. Check out my latest book titled as First Principles Thinking: Building winning products using first principles thinking
Posted in Deep Learning, Machine Learning. Tagged with Deep Learning, machine learning.