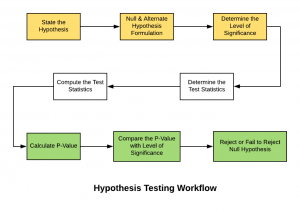 Hypothesis testing is a technique that helps scientists, researchers, or for that matter, anyone test the validity of their claims or hypotheses about real-world or real-life events. Hypothesis testing techniques are often used in statistics and data science to analyze whether the claims about the occurrence of the events are true, whether the results returned by performance metrics of machine learning models are representative of the models or they happened by chance. This blog post will cover some of the key statistical concepts including steps and examples in relation to what is hypothesis testing, and, how to formulate them. The knowledge of hypothesis formulation and hypothesis testing holds the key to establish truth about the hypotheses and modify business processes for maximum business impact. You may want to check out this post on how hypothesis testing is at the heart of data science – What is data science? In later articles, hypothesis formulation for machine learning algorithms such as linear regression, logistic regression models, etc., will be explained.
You may want to check a related post titled – Type I error & Type II error in hypothesis testing.

What is a Hypothesis testing?

As per the definition from Oxford languages, a hypothesis is a supposition or proposed explanation made on the basis of limited evidence as a starting point for further investigation. As per the Dictionary page on Hypothesis, Hypothesis means a proposition or set of propositions, set forth as an explanation for the occurrence of some specified group of phenomena, either asserted merely as a provisional conjecture to guide investigation (working hypothesis) or accepted as highly probable in the light of established facts.

The hypothesis can be defined as the claim that can either be related to the truth about something that exists in the world, or, truth about something that’s needs to be established a fresh. In simple words, another word for the hypothesis is the “claim”. Until the claim is proven to be true, it is called the hypothesis. Once the claim is proved, it becomes the new truth about the thing. For example, let’s say that a claim is made that students studying for more than 6 hours a day gets more than 90% of marks in their examination. Now, this is just a claim or a hypothesis and not the truth in the real world. However, in order for the claim to become the truth for widespread adoption, it needs to be proved using pieces of evidence, e.g., data.  In order to reject this claim or otherwise, one needs to do some empirical analysis by gathering data samples and evaluating the claim. The process of gathering data and evaluating the claims or hypotheses with the goal to reject or otherwise (failing to reject) is termed hypothesis testing. Note the wordings – “failing to reject”. It means that we don’t have enough evidence to reject the claim. Thus, until the time that new evidence comes up, the claim can be considered the truth. There are different techniques to test the hypothesis in order to reach the conclusion of whether the hypothesis can be used to represent the truth of the world. One must note that the hypothesis testing never constitutes a proof that the hypothesis is absolute truth based on the observations. It only provides added support to consider the hypothesis as truth until the time that new evidences can against the hypotheses can be gathered. We can never be 100% sure about truth related to those hypotheses based on the hypothesis testing.

Simply speaking, hypothesis testing is a framework that can be used to assert whether the claim or the hypothesis made about a real-world/real-life event can be seen as the truth or otherwise based on the given data (evidences). For example:

Once the hypothesis is defined or stated, the next step is to formulate the null and alternate hypothesis in order to begin hypothesis testing as described above.

What is a null hypothesis?

What is an alternate hypothesis?

Examples of formulating the null and alternate hypothesis

The following are some examples of the null and alternate hypothesis.

Here is the diagram which represents the workflow of Hypothesis Testing. 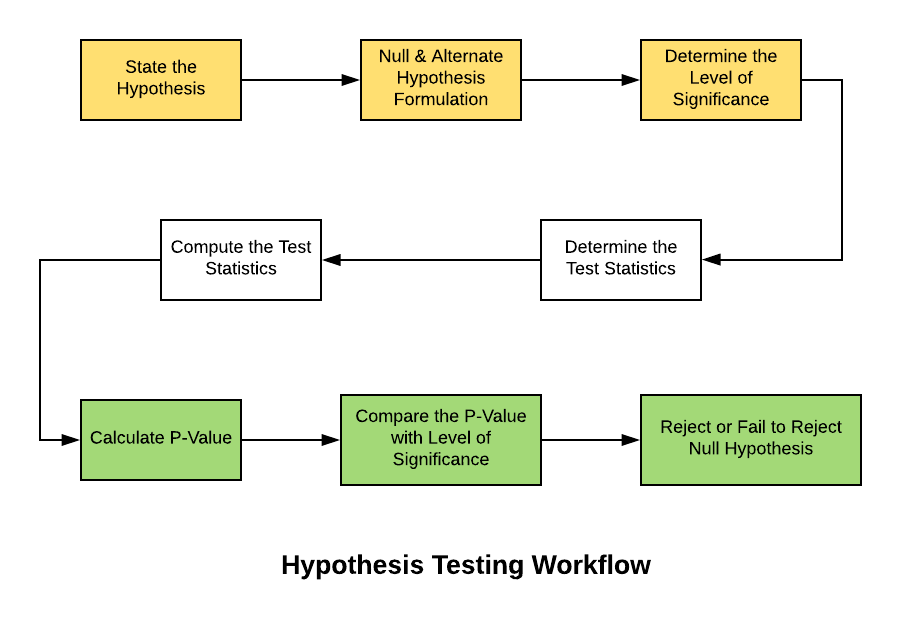 Based on the above, the following are some of the steps to be taken when doing hypothesis testing:

Once you formulate the hypotheses, there is the need to test those hypotheses. Meaning, say that the null hypothesis is stated as the statement that housing price does not depend upon the average income of people staying in the locality, it would be required to be tested by taking samples of housing prices and, based on the test results, this Null hypothesis could either be rejected or failed to be rejected. In hypothesis testing, the following two are the outcomes:

Take the above example of the sugar packet weighing 500 gm. The Null hypothesis is set as the statement that the sugar packet weighs 500 gm. After taking a sample of 20 sugar packets and testing/taking its weight, it was found that the average weight of the sugar packets came to 495 gm. The test statistics (t-statistics) were calculated for this sample and the P-value was determined. Let’s say the P-value was found to be 15%. Assuming that the level of significance is selected to be 5%, the test statistic is not statistically significant (P-value > 5%) and thus, the null hypothesis fails to get rejected. Thus, one could safely conclude that the sugar packet does weigh 500 gm. However, if the average weight of canned sauce would have found to be 465 gm, this is way beyond/away from the mean value of 500 gm and one could have ended up rejecting the Null Hypothesis based on the P-value.

There is a claim that doing pranayama yoga results in reversing diabetes. Which of the following is true about null hypothesis?

I have been recently working in the area of Data analytics including Data Science and Machine Learning / Deep Learning. I am also passionate about different technologies including programming languages such as Java/JEE, Javascript, Python, R, Julia, etc, and technologies such as Blockchain, mobile computing, cloud-native technologies, application security, cloud computing platforms, big data, etc. For latest updates and blogs, follow us on Twitter. I would love to connect with you on Linkedin. Check out my latest book titled as First Principles Thinking: Building winning products using first principles thinking
Posted in AI, Data Science, Machine Learning. Tagged with ai, big data, Data Science, machine learning.