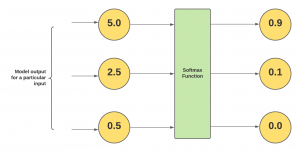 In this post, you will learn about the concepts of what is Softmax regression/function with Python code examples and why do we need them? As data scientist/machine learning enthusiasts, it is very important to understand the concepts of Softmax regression as it helps in understanding the algorithms such as neural networks, multinomial logistic regression, etc in a better manner. Note that the Softmax function is used in various multiclass classification machine learning algorithms such as multinomial logistic regression (thus, also called softmax regression), neural networks, etc.

Before getting into the concepts of softmax regression, let’s understand what is softmax function.

Let’s understand this with an example. Let’s say the models (such as those trained using algorithms such as multi-class LDA, and multinomial logistic regression) output three different values such as 5.0, 2.5, and 0.5 for a particular input. In order to convert these numbers into probabilities, these numbers are fed into the softmax function as shown in fig 1.

Here is the Python code which was used to derive the value shown in fig 2.

Why is Softmax Function needed?

The softmax function is used in classification algorithms where there is a need to obtain probability or probability distribution as the output. Some of these algorithms are the following:

In artificial neural networks, the softmax function is used in the final/last layer.

The softmax function is also used in the case of reinforcement learning to output probabilities related to different actions to be taken.

What is Softmax Regression?

The above functions can also be represented as a fully-connected single-layer neural network where the single layer consists of three computation units such as those shown below:

But the above approach can be inefficient because it generally requires a lot of duplicated effort. Softmax regression address this issue by using the softmax function to compute a probability for each class, based on the values of the input features. As shown in the first section, the softmax function is defined as follows:

The output values or probabilities such as y1, y2, and y3 can be calculated by using the softmax function with the logits output value o1, o2, and o3 as shown in the function below.

For example, for a given input item, if the output value for different classes y1, y2, and y3 comes out to be 0.1, 0.2, and 0.7 respectively, the input item is predicted to be belonging to class 3 with the highest probability value.

A real-world example where softmax regression can be used is image classification. You can use MNIST data or Fashion-MNIST data which is more complex than the MNIST data. The Fashion-MNIST, as shown below, consists of images from 10 categories, each represented by 6000 images in the training dataset and by 1000 in the test dataset. Consequently, the training set and the test set contain 60000 and 10000 images, respectively. The images in Fashion-MNIST can be bucketed into the following categories as shown below: trousers, t-shirt, dress, pullover, sandal, coat, sneaker, bag, ankle boot, and shirt.

When softmax regression is applied for training the model to classify the images in one of the ten categories, there are 10 outputs pertaining to 10 classes. When trained using a neural network, the network will have the output in 10 dimensions. Softmax regression can be used for multiclass classification problem such as this.

The following will be steps followed for training the model using neural network and making predictions using softmax regression:

Here is the summary of what you learned about the softmax function, softmax regression and why do we need to use it:

I have been recently working in the area of Data analytics including Data Science and Machine Learning / Deep Learning. I am also passionate about different technologies including programming languages such as Java/JEE, Javascript, Python, R, Julia, etc, and technologies such as Blockchain, mobile computing, cloud-native technologies, application security, cloud computing platforms, big data, etc. For latest updates and blogs, follow us on Twitter. I would love to connect with you on Linkedin. Check out my latest book titled as First Principles Thinking: Building winning products using first principles thinking
Posted in Data Science, Machine Learning. Tagged with Data Science, machine learning, python.