In this post, we will discuss what Pearson’s r represents, how it works mathematically, its interpretation, statistical significance, and importance for making decisions in real-world applications such as business forecasting or medical diagnosis. We will also explore some examples of using Pearson’s r with real data sets so you can see how this powerful statistic works in action. As a data scientist, it is very important to understand Pearson’s r and its implications for making decisions based on data.

What is Pearson Correlation Coefficient?

Pearson correlation coefficient can be used to examine relationships between variables in a variety of real-world applications such as some of the following:

Pearson’s correlation coefficient has implications for hypothesis testing as well as other decision-making processes. By measuring the strength of a linear relationship between two variables, researchers can make informed decisions based on their findings which can help guide future research studies or inform corporate policies and practices. Pearson’s correlation coefficient also provides a basis for making predictions about future outcomes when given certain inputs or conditions–which is incredibly valuable in various business settings where predicting customer behavior or market trends is critical for success.

The Pearson Correlation Coefficient formula is given as the following: 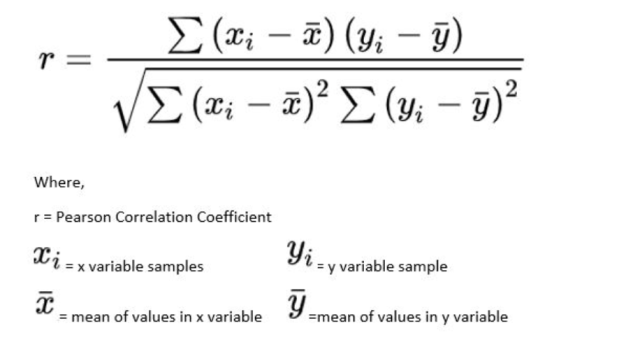 Pearson Correlation Coefficients should not be taken as definitive proof that there is a relationship between two variables; rather they should only serve as indicators for further investigation which can then lead to more conclusive results regarding such relationships. In addition, Pearson Correlation Coefficients are considered reliable only when sample sizes are large enough and data points are normally distributed; if these conditions are not met then other statistical tests may be necessary in order to determine the significance of any indicated correlations.

Scatterplots are a powerful way of visualizing data and relationships between two variables.

They are graphs that display data points in which the values for two variables are plotted against each other. The x-axis usually displays one variable, and the y-axis displays the other variable. Each point on a scatter plot represents one data set composed of the independent and dependent variables being studied; when plotted in relation to each other, these points form clusters or patterns which allow us to analyze the strength and direction of the relationship between these variables.

When plotting scatter plots, Pearson’s correlation coefficient can be used to determine how closely related two variables are to each other by measuring the degree of association between them.

where x̅ and y̅ represent mean values for the respective x and y values.

The picture below might represent a very high correlation coefficient closer to 1.

The picture below might represent decently high correlation coefficient closer to 0.5.

The picture below might represent a very low correlation coefficient closer to 0. 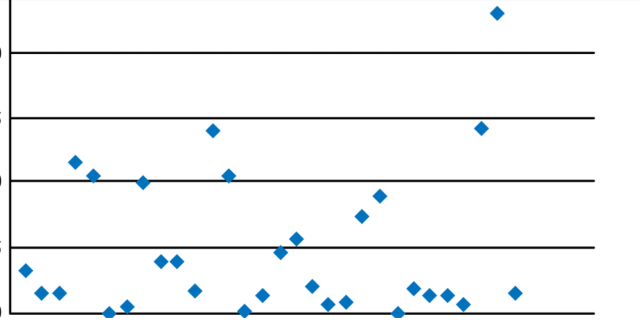 In order to determine whether any given Pearson correlation coefficient has a statistically significant result or not, we will need to go through the following steps:

The following is the formula for calculating the value of t-statistics for determining statistical significance of Pearson correlation coefficient:

In the above formula, r is correlation coefficient value and n is sample size.

One can also calculate p-value and compare it with 0.05 significance level. If p-value is less than 0.05, the Pearson correlation coefficient can be considered to be statistically significant and the null hypothesis rejected in favor of the alternate hypothesis. Recall that a P-value is a statistic that tells us how likely an observed result is due to chance alone. If a Pearson Correlation Coefficient has an associated P-value below 0.05, then it can be considered statistically significant. This means that the Pearson Correlation Coefficient is unlikely to have occurred by chance and thus supports the hypothesis that there is indeed some kind of relationship between the two variables being studied.

I have been recently working in the area of Data analytics including Data Science and Machine Learning / Deep Learning. I am also passionate about different technologies including programming languages such as Java/JEE, Javascript, Python, R, Julia, etc, and technologies such as Blockchain, mobile computing, cloud-native technologies, application security, cloud computing platforms, big data, etc. For latest updates and blogs, follow us on Twitter. I would love to connect with you on Linkedin. Check out my latest book titled as First Principles Thinking: Building winning products using first principles thinking
Posted in Data Science, statistics. Tagged with Data Science, statistics.