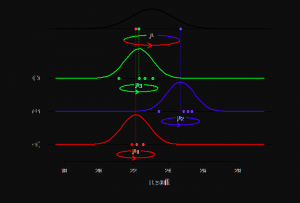 First, we will take a real-world example and try and understand fixed and random effects.

What are Fixed Effects Model?

Fixed effect models assume that the explanatory variable has a fixed or constant relationship with the response variable across all observations. Let’s understand how the patients’ response can be estimated using both the fixed-effects models and, the mixed model which combines both fixed and random effects. In this example given below, the patients’ response to the vaccine is modeled as the probability of the vaccinated person falling sick due to Covid-19. While creating the model, we may need to consider the effect of some of the following (as features):

While training linear model with fixed effects due to above features, the model will look like the following:

A fixed-effect model is often used in medical research when testing a new drug. In this example, we want to identify if the efficacy of the new drug differs from that of the current medication available on the market. We assume there is no difference between these two types of drugs and any observed differences are due to chance alone.

What are Random Effects Model?

A random-effects model assumes that explanatory variables have fixed relationships with the response variable across all observations, but that these fixed effects may vary from one observation to another. For example, let’s say you might be interested in studying how different levels of stress affect heart rate and blood pressure; here the assumption is that there is a fixed difference (i.e., slope) between each level of stress and its corresponding outcome (i.e., heart rate or blood pressure). However, this fixed difference can vary across individuals (e.g., some people might experience more stress than others when exposed to the same level of stress).

Let’s understand with the example shown in the previous section. One of the factors/features used in the fixed effect model is country. Is this appropriate to consider the country predictor variable as a fixed effect? There may be factors related to country/region which may result in different patients’ responses to the vaccine, and, not all countries are included in the study. The experiment if performed next time can include some other countries which were not included in the first experiment simply because vaccines were not tested in those countries. Essentially, we are talking about working with only a sample of countries from all countries. So treating the country as a random effect will allow us to incorporate the variability in the country effect that is due to picking a set of K countries out of all the countries or only a limited number of countries where the test has been performed.

The general idea is that the list of countries used for modeling is not fixed but was selected from a set of all the countries where the vaccine was tested. There could be more countries possible provided vaccines were tested there as well. This would have resulted in different patients’ responses to the vaccine. So treating the country as a random effect incorporates that type of variability into the model that we would not get from treating the country as the fixed effect. Thus, the model would look like the following where fixed effects for age, gender is considered and a random effect for the country is considered.

What are mixed-effects models?

The mixed-effect model assumes that the explanatory variables have different relationships with the response variable within groups (e.g., subjects) but share the same fixed relationship across groups. For example, you could be studying the effect of taking an online course on academic performance in college students where there is a fixed difference between males and females but within each group (males or females) they share similar relationships with outcomes like grades.

The most fundamental difference between the fixed and random effects models is that of inference/prediction. A fixed-effects model supports prediction about only the levels/categories of features used for training. A random-effects model, by contrast, allows predicting something about the population from which the sample is drawn. There can be categories/levels of the features/factors which may not have been present in the sample. If the effect size related to the variance between the samples drawn is large enough, it can be fairly concluded that the population will exhibit that effect.

If the fixed effect model is used on a random sample, one can’t use that model to make a prediction/inference on the data outside the sample data set. The fixed-effects model assumes that the individual-specific effect is correlated to the independent variable. The random-effects model allows making inferences on the population data based on the assumption of normal distribution. The random-effects model assumes that the individual-specific effects are uncorrelated with the independent variables.

Here is the summary of what you learned about the fixed and random effect models:

I have been recently working in the area of Data analytics including Data Science and Machine Learning / Deep Learning. I am also passionate about different technologies including programming languages such as Java/JEE, Javascript, Python, R, Julia, etc, and technologies such as Blockchain, mobile computing, cloud-native technologies, application security, cloud computing platforms, big data, etc. For latest updates and blogs, follow us on Twitter. I would love to connect with you on Linkedin. Check out my latest book titled as First Principles Thinking: Building winning products using first principles thinking
Posted in Data Science, statistics. Tagged with Data Science.