There are many different ways in which machine learning (ML) models’ fairness could be determined. Some of them are statistical parity, the relative significance of features, model sensitivity etc. In this post, you would learn about how model sensitivity could be used to determine model fairness or bias of model towards the privileged or unprivileged group. The following are some of the topics covered in this post:

How could Model Sensitivity determine Model Bias or Fairness? 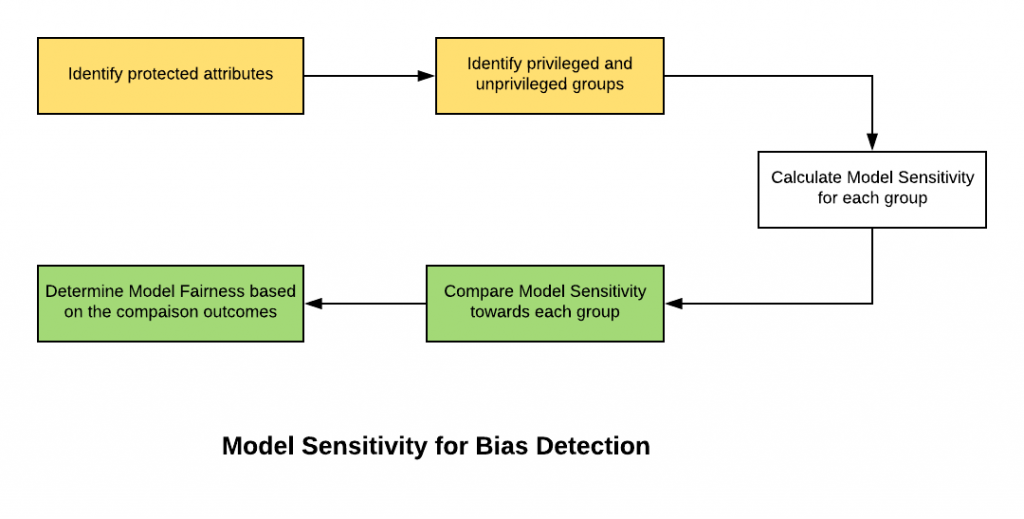 Going by the above, high value of sensitivity (very near to but less than 1) would mean that the value of true positive predictions (numerator) is very near (but less) than the denominator (true positives + false negatives). This implies that the value of false negative predictions would be very small. This would further mean that only a few instances of actual positive cases got predicted incorrectly as negative. The model was very accurate in predicting positive cases. Going by the similar logic, lower sensitivity value would mean that the model was not very accurate in predicting positive cases. There were many instances of positives which got predicted as negatives (and, hence false negative).

The model would be said to be fair if the value of model sensitivity for the privileged and unprivileged group are very close to each other if not same.

One of the techniques of determining whether the model is biased towards (in favor of) the privileged group is by calculating the sensitivity of the model towards the privileged group (females in the current example). A high value of sensitivity for females would mean that the model has mostly predicted correctly about the positive cases in case of the female. This means that most of the female who reoffended were found to be predicted correctly. And, there is only very less number of the female who got favor in terms of getting classified as good (negative) although they were re-offender (positive) which essentially means that the value of the false negatives is very less. Thus, the model does not provide any benefits to the females. And, hence, the model does not look to be biased toward female as most of the female offenders got predicted correctly. On the other hand, a low value of sensitivity would mean that there was a very large number of females who got favored in terms of getting classified as good (negative) although they were found to be re-offenders (positive). This resulted in female getting benefitted as a result of the model prediction. And, hence, the model could be said to be biased in favor of the female. The same analogy could be applied to male as well.

In this post, you learned about how model sensitivity could be used for determining model fairness. A model would be said to be fair (unbiased) if it is equally sensitive (true positive rates) to both privileged and unprivileged groups. A model which is lesser sensitive (high number of false negatives) to one of the groups could be seen as providing benefit to that group as a large number of instances would be classified as negative although they ain’t (and, hence, false negative).