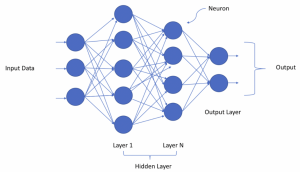 In this post, you will get to learn deep learning through simple explanation (layman terms) and examples.

What is Deep Learning?

What is Artificial Neural Network?

Artificial neural network is a bunch of computation units called neurons laid out in one or more layers while the neurons being connected with each other. Neuron as a computation unit can be expressed as a weighted sum of inputs and looks like the following:

What is Deep Neural Network?

How does the Deep Neural Network work?

The core to simple (single layer or MLP) neural network or deep neural network (2 or more hidden layers) is the computation units called neurons laid out in layers and connected with neurons of another layers. The neurons perform computation on input data and results in an output based on the activation function. These computations result in geometric transformations of input data. For instance, arithmetic operation on two vectors result in another vector which can be visualized in the following manner.

Similarly, a rotation of a 2D vector by an angle \(\theta\) can be achieved via a dot product with a 2 × 2 Matrix.

Based on above, it can be comprehended that a neural network can be seen as a very complex geometric transformation in a high-dimensional space, implemented via a long series of simple arithmetic operations. The following analogy is taken from the book, Deep Learning with Python by François Chollet. Deep learning can be understood as uncrumpling a highly folded data manifolds into neat representation of data. It is same as uncrumpling the paper ball to a neat looking paper as shown in the below diagram.

You may notice that once the paper ball shown above is uncrumpled, it becomes easy to identify the paper. In the similar way, deep neural network uncrumple data with manifolds into simple representation step-by-step, layer-by-layer. Each layer in a deep network applies a transformation that disentangles the data a little—and a deep stack of layers making the whole process as a sophisticated disentanglement task like uncrumpling paper and straighten it well enough to understand the paper in a better manner.

Here is the summary of what you learned regarding the deep learning and deep neural network: