The article lists down two most commonly used folder structure for a Spring MVC/Hibernate based web application project. In fact, this folder structure could be used with any other MVC framework like Spring. Following are different two folder structures described later in this article:

As per this Eclipse page, Dynamic web projects contain dynamic Java EE resources such as servlets, JSP files, filters, and associated metadata, in addition to static resources such as images and HTML files. Following is how the folder structure looks like on the disk:

Following is the sample screenshot of how it looks within Eclipse: 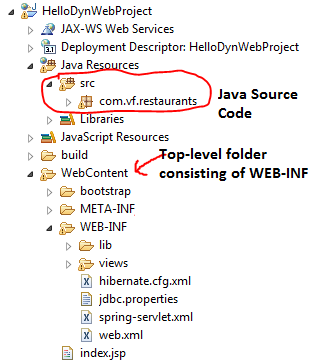 Following is the minimum folder structure based on above description that would be enough to run your hello world Spring MVC/Hibernate application: