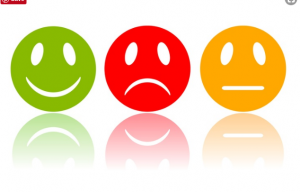 Sentiment analysis of a text document such as speech, articles on websites etc is about assessing sentiments associated with the document as a function of overall emotions expressed in form of different words. Sentiment analysis is primarily used for tracking voice of customer (VOC) by analyzing customer reviews, survey responses, etc., in social media websites such as Facebook, Twitter etc. The VOC can be related to products in general, an event, movies etc.

Google NLP API helps to measure positive and negative emotions related to a document. Thus, a document with sentiments such as sad or angry or hatred would be labeled as “negative”. The document with sentiments as happy or good or great would be labeled as positive. The sentiment having positive or negative emotions is scored in terms of values greater than or lesser than 0 respectively. Thus, the following holds true:

Before running following Java code within your Eclipse IDE, make sure you are set up with Google NLP. Refer to this page, How to Create Java NLP Apps using Google NLP API.

As the above code is run, the score comes as +0.1 and magnitude come as +3.0. This makes the document slightly more than neutral with mixed emotions.

Use the following text and you would see the sentiment score and magnitude as -0.2 and +3.0 respectively. This represents that document looks to have the negative emotion.

Thousands of motorists could be unwittingly driving around without valid car insurance, police have warned after identifying a worrying new scam known as ‘ghost broking’. With premiums soaring, fraudsters have been taking advantage of car owners’ desperation to find the best deal. Using popular social media sites, such as Facebook and Instagram, they pose as legitimate brokers working for reputable insurance firms, and contact motorists directly, offering to save them hundreds of pounds on their renewal. But the policy documents they produce are worthless and many victims only becoming aware they have been duped, when they have an accident and attempt to make a claim. To their horror they then discover they are liable for the entire cost of the accident, which can run into many thousands of pounds

In this post, you learned about details and code examples related to using Java for doing sentiment analysis using Google NLP APIs.

Did you find this article useful? Do you have any questions or suggestions about this article in relation to sentiment analysis using Google NLP API? Leave a comment and ask your questions and I shall do my best to address your queries.