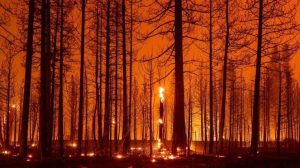 Climate change is a serious issue facing the world. The climate changes which are already affecting our planet can be seen in rising sea levels, melting ice caps and glaciers, more severe storms and hurricanes, more droughts, and wildfires increased precipitation in some areas of the world while other regions experience less rainfall. It’s important that we do what we can to reduce climate change risks by reducing greenhouse gas emissions into the atmosphere as well as adapting to climate impacts. Artificial intelligence (AI), machine learning (ML)/ deep learning (DL), advanced analytics have been widely used for decades across different industries such as finance, healthcare, etc., but their use cases related to climate change have not been explored much yet. In this blog post, I will list down different use cases in which AI & ML can be used to tackle climate change.

What are some of the key AI / ML use cases related to climate change?

It is a method to predict how much carbon will be removed from the atmosphere and stored. The earth’s climate has swung back and forth between glacial periods (ice ages) and interglacial periods (warm times). This is due to fluctuations in the earth’s orbit around the sun. The climate models can’t predict what the climate will be like in 100 or 1000 years because it’s very sensitive to small changes in temperature. Researchers are using machine learning algorithms to model carbon sequestration and its impact on climate change over time.

Fossil fuel combustion is a major source of CO2 emissions. Researchers are using climate models and machine learning algorithms to estimate how much CO2 can be emitted while still remaining within a given climate goal (i.e., staying under two degrees Celsius).

Greenhouse gases trap heat from escaping into space and are responsible for keeping the earth’s climate warm enough for life as we know it. Researchers use climate models to predict future concentrations of greenhouse gases. Machine learning techniques are used in climate model predictions so that they can be run faster and more efficiently.

Forest degradation is the process where a once healthy forest becomes unhealthy due to human activities such as mining, deforestation or unsustainable logging practices. It’s important for environmental scientists to be able to detect forest degradation as quickly and easily as possible so that climate change impacts can be reduced. Researchers are using machine learning algorithms and satellite data such as high-resolution images from the Landsat series of satellites in order to automate this process.

Climate scientists use climate models to predict future climate patterns all around the world. Researchers are using machine learning techniques on climate model outputs in order to identify climate-vulnerable regions that may be subject to extreme heat, drought or flooding due to climate change.

The global climate is changing due to human activity, which has led to increased frequency and intensity of climate events such as droughts, heatwaves, and wildfires. Wildfires are one of the most significant climate risks in many parts of the world because they release large amounts of carbon dioxide into the atmosphere. Researchers have developed a model to predict wildfire risk globally through machine learning algorithms applied to climate data sets that include rainfall, temperature, and humidity levels.

Crop yield forecasting uses machine learning and artificial intelligence techniques to predict climate change impacts such as how changes in rainfall, temperature, etc., will affect a region’s agriculture. The data used is based on historical climatic conditions along with projections of future climate scenarios. Machine learning algorithms can be used to predict climate change impacts on crop yields.

It is important for us to be able to predict how climate change will affect sea ice loss in both the Arctic and Antarctic. Researchers have used machine learning algorithms to model climate warming over time while also estimating what that means for sea ice levels across the planet by 2040.

Carbon dioxide (CO₂) is a heat-trapping greenhouse gas (GHG) that is emitted into the atmosphere through human activities such as driving cars, burning coal or natural gas for energy, and deforestation. Researchers have developed a climate-carbon cycle model using machine learning algorithms to improve estimates of carbon emissions by 50 percent over traditional methods.

Machine learning algorithms are being employed to study climate data from satellites measuring sea level rise — which will help scientists determine how quickly seas could swell in the future. Researchers from the University of Colorado, Boulder, and Old Dominion University are using machine learning algorithms to make climate change predictions by studying sea level rise. The study seeks to understand how climate changes affect global sea levels in order for scientists to better predict future climate patterns that may pose a threat to coastal cities around the world.

Climate change action plans can be a part of overall government policy or local neighborhood levels initiatives like green roofs and urban heat island reduction. Deep learning techniques can be used for building data models on various factors such as city infrastructure and vegetation etc.

I have been recently working in the area of Data Science and Machine Learning / Deep Learning. In addition, I am also passionate about various different technologies including programming languages such as Java/JEE, Javascript, Python, R, Julia etc and technologies such as Blockchain, mobile computing, cloud-native technologies, application security, cloud computing platforms, big data etc. I would love to connect with you on Linkedin.
Posted in Climate Change, Data Science, Machine Learning. Tagged with Data Science, machine learning.