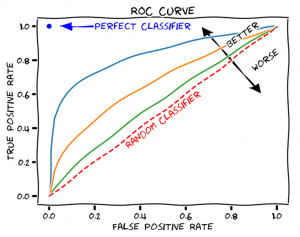 The following are different techniques that can be used for evaluating machine learning model performance:

What is RMSE metrics?

RMSE is an abbreviation for Root Mean Squared Error. RMSE is used to evaluate the quality of regression models and assess whether they meet certain criteria. It is a measure of how well an algorithm estimates regression coefficients (or weights) in linear regression analysis and quantifies error due to not knowing the true value. This metric represents the average of all errors committed by a model along its prediction path. In machine learning, RMSE stands as the most commonly used measure to evaluate how well regression models are performing on their tasks. RMSE can be compared to other regression model evaluation metrics such as mean absolute error (MAE).

RMSE is calculated as follows:

The smaller the value of RMSE, the better is the regression model.

What is AUC-ROC Curve?

AUC (Area Under The Curve) ROC (Receiver Operating Characteristics) Curve is a machine learning model performance evaluation technique that uses the area under the ROC curve to evaluate classification model performance. The curve is created by plotting the true positive rate against the false-positive rate. The model performance is measured by this curve, and it helps understand how a model performs across different threshold values for classifying data points as positives or negatives.AUC-ROC curve is defined as the area under the curve of a Receiver Operating Characteristic (ROC) plot. It is used when performing classification analysis. This curve can be used to describe the performance of a classifier when faced with ROC space, which is a two-dimensional plane created by plotting True Positive Rate (TPR) and False Positive Rate (FPR). The AUC value ranges from 0.50 to 0.70 for random classification while it soars to 0.95 if classification is perfect (i.e., all True Positives and no False Negatives).

AUC-ROC curve can be used in classification problems with two or more classes. In this case, the AUC-ROC curve will be used to evaluate a classifier for each possible outcome of classification (e.g., given an email containing spam/not spam). This is done by finding out the TPR and FPR values associated with these outcomes. The area under ROC curve (AUC) will then be the average AUC of all classifiers. True positive rate is the percentage of data points that are correctly classified as positives, and the false-positive rate is the percentage of negative data points which are incorrectly being marked as positive. True positive rate is also called sensitivity, and false-positive rate is also called fall-out.

Here is a sample plot for AUC-ROC curve: 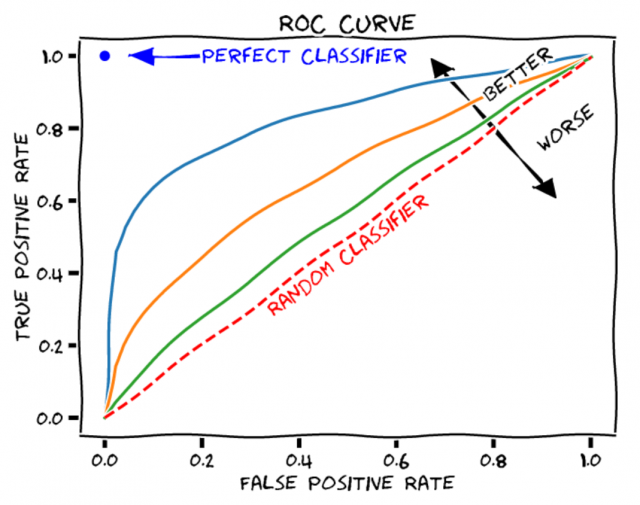 Higher the value of area under the curve, the machine learning model is performing well.

AUC-ROC is used to measure machine learning model performance for binary classification problems. In such cases, the models have a higher chance of overfitting and producing poor results on unseen test data. AUC-ROC Curve is also useful when evaluating machine learning model performance for multi-class problems, where the number of classes is more than two.

The formula for measuring true positive rate is :

The formula for measuring false-positive rate is:

What is Logarithmic loss?

Logarithmic loss is used in classification tasks where the labels are on an exponential scale, such as predicting time left to live (binary classification) or whether a house price is above or below certain value threshold. Log loss can be applied to regression problems as well, but it will behave differently depending on what you’re trying to solve. If there isn’t exponential separation between classes (meaning they’re very close together), then Log loss behaves similarly to cross entropy. In other words, if you have a classification task on an exponential scale, but the classes aren’t very different from each other (meaning there is overlap between them), Log loss might not be helpful.

The idea behind the use of Log loss is similar to taking a base-e exponential or natural logarithm in order to compare model scores from high-value functions which may indicate poor machine learning model performance.

The logarithmic loss value is defined as:

$$Loss = – \log ( P(Y=y))$$ Where $y$ can be either one of the classes in case of classification problems or a real-value target in case of regression problems.

The machine learning models are evaluated by minimizing this loss function. The model with the least value for logarithmic loss has the best performance. This technique is especially useful when there are more than one models that provide similar performances or have almost equal scores, as in such cases it will be difficult to choose the machine learning model that performed better.

In case of machine learning problems with more than two classes, log loss is replaced by the softmax cross-entropy function which ensures that all probabilities get multiplied rather than addition being used to calculate the final score. For classification tasks with large number of classes, Log loss is not a good choice because it doesn’t have the ability to differentiate between many classes as well as other classification losses can by normalizing results across all of your classes.

What is Kappa’s score?

It is sometimes also called Cohen’s kappa and has been used since the 1960s to assess inter-rater reliability. It requires a set of known ground truth labels that are assigned by multiple parties for training data points, which can then be compared to the machine learning model’s labels.

What is a confusion matrix?

What is Kolmogorov-Smirnov Test?

Kolmogorov-Smirnov (KS) test is a non-parametric test used for decision-making in machine learning. It is a statistical measure used to evaluate the difference between two probability distributions. For example, it can be used to compare how well an algorithm performs with new data over time or across different machine learning models trained on the same dataset but using different training parameters (hyper-parameters).

The Kolmogorov-Smirnov test is also used for evaluating the equality of two empirical distribution functions (EDF) or to check if they come from a common parent distribution.

The KS test can be calculated as follows:

Where A and B are machine learning models.

There are generally two types of cross-validation techniques:

8. What is the Gini coefficient?

What is the gain and lift chart?

A gain chart is used to find the change in model performance when a machine learning algorithm is applied to independent test data. A gain chart plots precision, recall, and f-score curves for each classifier value.

A combination of gain and lift charts can be used to understand machine learning model performance on independent test data.

What is Chi-square test?

Chi-square test is used to assess the performance of machine learning classification models. It is a hypothesis testing technique that tests if the observed frequencies of events are significantly different from their expected frequency. The null hypothesis for chi-square test is “there exists no difference in model performance” and it’s alternative hypothesis states ‘the model performs differently than what was expected’

In order to use chi-square test, the machine learning model has to be trained with categorical variables only.