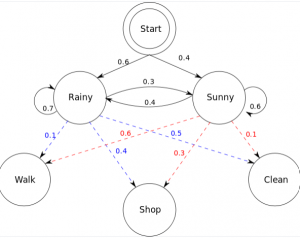 What are Markov Models?

Markov models are named after Andrey Markov, who first developed them in the early 1900s. Markov models are a type of probabilistic model that is used to predict the future state of a system, based on its current state. In other words, Markov models are used to predict the future state based on the current hidden or observed states. Markov model is a finite-state machine where each state has an associated probability of being in any other state after one step. They can be used to model real-world problems where hidden and observable states are involved. Markov models can be classified into hidden and observable based on the type of information available to use for making predictions or decisions. Hidden Markov models deal with hidden variables that cannot be directly observed but only inferred from other observations, whereas in an observable model also termed as Markov chain, hidden variables are not involved.

What is Markov Chain?

Markov chains, named after Andrey Markov, can be thought of as a machine or a system that hops from one state to another, typically forming a chain. Markov chains have the Markov property, which states that the probability of moving to any particular state next depends only on the current state and not on the previous states.

There are three different states such as cloudy, rain, and sunny. The following represent the transition probabilities based on the above diagram:

Using this Markov chain, what is the probability that the Wednesday will be cloudy if today is sunny. The following are different transitions that can result in a cloudy Wednesday given today (Monday) is sunny.

As shown above, the Markov chain is a process with a known finite number of states in which the probability of being in a particular state is determined only by the previous state.

What are Hidden Markov models (HMM)?

The hidden Markov model (HMM) is another type of Markov model where there are few states which are hidden. This is where HMM differs from a Markov chain. HMM is a statistical model in which the system being modeled are Markov processes with unobserved or hidden states. It is a hidden variable model which can give an observation of another hidden state with the help of the Markov assumption. The hidden state is the term given to the next possible variable which cannot be directly observed but can be inferred by observing one or more states according to Markov’s assumption. Markov assumption is the assumption that a hidden variable is dependent only on the previous hidden state. Mathematically, the probability of being in a state at a time t depends only on the state at the time (t-1). It is termed a limited horizon assumption. Another Markov assumption states that the conditional distribution over the next state, given the current state, doesn’t change over time. This is also termed a stationary process assumption.

A Markov model is made up of two components: the state transition and hidden random variables that are conditioned on each other. A hidden Markov model consists of five important components:

Let’s understand the above using the hidden Markov model representation shown below: 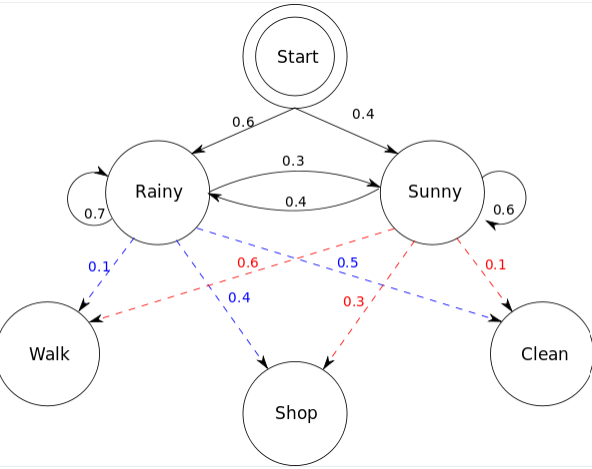 Let’s notice some of the following in the above picture:

Here are a few real-world examples where the hidden Markov models are used:

What are some libraries which can be used for training hidden Markov models?

I have been recently working in the area of Data analytics including Data Science and Machine Learning / Deep Learning. I am also passionate about different technologies including programming languages such as Java/JEE, Javascript, Python, R, Julia, etc, and technologies such as Blockchain, mobile computing, cloud-native technologies, application security, cloud computing platforms, big data, etc. For latest updates and blogs, follow us on Twitter. I would love to connect with you on Linkedin. Check out my latest book titled as First Principles Thinking: Building winning products using first principles thinking
Posted in Data Science, Python. Tagged with Data Science.