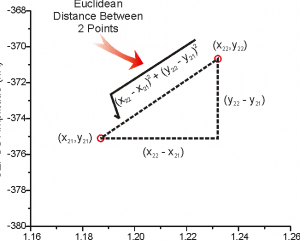 In this post, you will learn different types of distance measures used in different machine learning algorithms such as K-nearest neighbours, K-means etc.

Distance measures are used to measure the similarity between two or more vectors in multi-dimensional space. The following represents different forms of distance metrics / measures:

Minkowski distance is the general form of Euclidean and Manhattan distance. Mathematically, it can be represented as the following:

When the value of P becomes 1, it is called Manhattan distance. When P takes the value of 2, it becomes Euclidean distance. Let’s understand these distance measures with illustrative diagrams.

The formula of Euclidean distance looks like the following. It is formed by assigning the value of P as 2 in Minkowski distance formula.

Let’s look at another illustrative example to understand Euclidean distance. Here it goes.

Recall the definition of displacement in Physics. Displacement is defined as the shortest distance between two different, and, so is Euclidean distance.

If you want to find Manhattan distance between two different points (x1, y1) and (x2, y2) such as the following, it would look like the following:

Diagrammatically, it would look like traversing the path from point A to point B while walking on the pink straight line.

Another diagram which illustrates the Manhattan distance is the following. It is the path traversed represented by the line with arrow.

Cosine similarity is a measure of similarity between two non-zero vectors. It is calculated as an inner product of the two vectors that measures the cosine of the angle between them. The vectors which are most similar will have 0 degree between them. In other words, the most similar vectors will coincide with each other. The value of cos 0 is 1. The vector which will be opposite to each other or most dissimilar will have value as -1 (cos(180deg).

The advantage of using cosine distance is the sheer speed at calculating distances between sparse vectors. For instance, if there are 500 attributes collected about houses and 200 of these were mutually exclusive (meaning that one house had them but the others don’t), then there would only be need to include 300 dimensions in the calculation.

The diagram below represents cosine similarity between two vectors having different angle between them.

Two points may seem to have same Euclidean distance but different Mahalanobis distance and hence are not similar. Look at the diagram given below.

You may note that point X can be seen as an outlier in the data distribution shown in the above diagram although the Euclidean distance of red and green points is same from the mean.

One another type of statistical measure is Jaccard Distance. It takes into consideration the intersection or overlap of attributes between two objects between which the distance needs to be found. For example, lets say there are two points represented by a set of attributes. If one or more attributes for one points match another, then they would be overlapping and therefore close in distance. If the points had diverging attributes they wouldn’t match. The following diagram represents the Jaccard distance formula:

I have been recently working in the area of Data analytics including Data Science and Machine Learning / Deep Learning. I am also passionate about different technologies including programming languages such as Java/JEE, Javascript, Python, R, Julia, etc, and technologies such as Blockchain, mobile computing, cloud-native technologies, application security, cloud computing platforms, big data, etc. For latest updates and blogs, follow us on Twitter. I would love to connect with you on Linkedin. Check out my latest book titled as First Principles Thinking: Building winning products using first principles thinking
Posted in Data Science, Machine Learning. Tagged with Data Science, machine learning.