As I looked around some of the artificial intelligence (AI) related acquisitions in last few years, I got convinced, at least, on the fact that majority of large companies such as Google, Facebook, IBM are seeing various different artificial intelligence topics to play a key role in impacting end users’ life (and hence, developers) in the future. With that as the background, it gave me good enough reasons to start doing research in relation with following:

The article presents an analysis in different fields of artificial intelligence in relation with following:

AI Research in Top 20 US Universities: An Analysis

Following is a plot representing the AI topics against their occurrences in top 20 US universities: 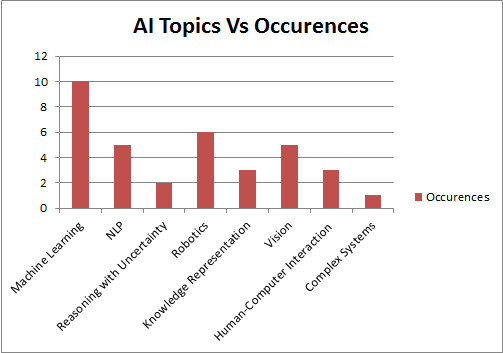 From above plot, one could rank AI topics in following order of occurrence that could also act as some sort of guideline for students to select their courses appropriately:

Following represents these AI topics vis-a-vis some of the universities where they are taught:

Following represents overview on different acquisitions that happened in some of the above mentioned AI topics:

As mentioned on Wikipedia page, Machine learning, a branch of artificial intelligence, concerns the construction and study of systems that can learn from data. For example, a machine learning system could be trained on email messages to learn to distinguish between spam and non-spam messages. After learning, it can then be used to classify new email messages into spam and non-spam folders.

Machine learning has seen many acquisitions in last year or so. Some of them are following:

Following have been some of the acquisitions in the area of Robotics:

Vision represents some of the following topics of research:

This field has seen many a acquisitions in the recent times, some of which are following:

Following are top 5 topics in the field of artificial intelligence that could be considered by developers and entrepreneurs for their time & money: