The article recommends 4 simple tips to load your webpage in faster manner based on Google Pre-* technology recommendations. These tips are based on suggestions by Google Engineer, Ilya Grigorik in his presentation that could be found on this page. Do note that most of these (such as pre-fetch, pre-resolve etc) are also part of their PageSpeed initiative.

While I was reading the presentation, it struck me as to check out on who is leading the internet browser share in the market. Following is the plot I could come up with data based on browser usage statistics. And, the winner is Google Chrome. Thus, I found it relevant enough to check out the recommendations and consider optimizing the webpages to load efficiently in Chrome and other browsers. 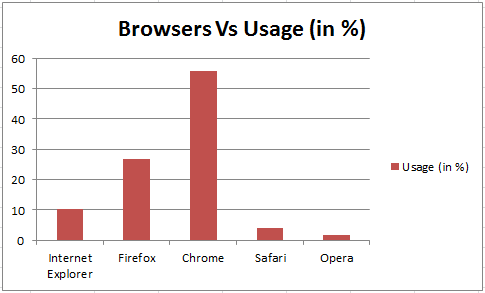 Following diagram represents what goes on inside when we try and access a website from Chrome browser:

From above, it could be figured out that Chrome tries and performs 4 activities while it loads the webpage:

As in Chrome browsers, you must have noticed that while you are typing the search keywords, the search result page gets loaded. How does this happen?

What happens in the background is that browser pre-resolves the dns names, pre-connect and pre-renders the page.

What should developers do to enhance the web page loading speed further (especially in Chrome)?

Given the fact that Chrome is already optimized to load webpages in a faster manner, if only, developers do the following, it would only help Chrome (in form of hints) to take appropriate action and load the page faster. Following code snippets need to be included within <head></head> tag that would act as hints to the browsers.