Learn R – How to Get Started with GGPlot – Code Example

This article represents quick introduction to GGPlot along with key concepts and code examples using R programming language. Please feel free to comment/suggest if I missed to mention one or more important points. Also, sorry for the typos.
Following are the key points described later in this article:

ggplot is one of statistical package that facilitates the easy creation of different plots. One of the key concept related to ggplot is that ggplot is built up layer by layer. This means that one could start by initializing the ggplot using ggplot(data) command and then, keep adding on plot functions as another layer in order to finally draw the plot/chart. The layers are separated by “+” sign. Following is a sample ggplot command created using diamonds data that gets loaded by default when loading ggplot.

Following is the plot for above command: 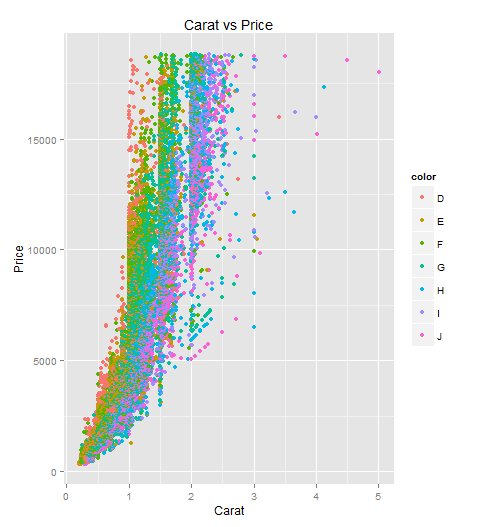 Before going further, lets quickly see what would it take to install and load ggplot2 package.

Following are some key concepts to know when starting with ggplot:

Nidhi has been been actively blogging in different technologies such as AI / machine learning and internet technologies. Her field of interest includes AI / ML, Java, mobile technologies, UI programming such as HTML, CSS, Javascript (Angular/ReactJS etc), open-source and other related technologies.
Posted in Big Data. Tagged with big data, datascience.