Now that the whole of country, India, has woken up to a corruption free governance, if there is one technology that could help accelerate this movement in a managed manner, it has to be business process management and related tools & frameworks.

Janata Darbar (People’s gathering with government stakeholders for grievances resolution) has always been famous for quite sometime. However, very recently, it caught media attention for how unmanaged it can go if not planned properly. AAP (Aam Aadmi Party) chief minister, Arvind Kejriwal and his team of cabinet ministers decided to talk to people and scheduled a meeting where they expected 5000 people to gather and thus, planned accordingly. However, on the day, it was around 20,000 people who got gathered and it created whole lot of chaos. Take a look at the picture below: 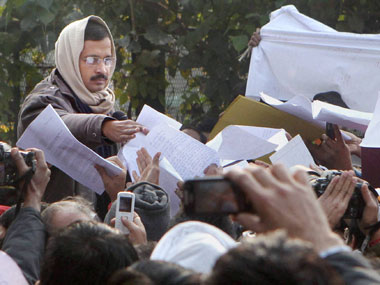 The primary reason for chaos was the desire for most of the 20000 people to get heard from Kejriwal and his cabinet minister such that their complaints will get special attention and get faster resolution. All these years, these people have seen their complaints going no where and hence lost the trust on government and governance and stopped reaching out to government. The very fact that the AAP created an environment of transparency has regenerated excitement in the people and they are out once again to speak about their problems and get heard.

One thing that has become clear in the recent incidence of Janata Darbar in Delhi is that there is a need for people to log their complaints with the government and that, there is required to be a system which has key characteristics such as transparency on how is the complaint getting handled.

Given the fact that already there are a set of systems in place for managing different aspects of public complaints, what is needed is a workflow based solution which integrates all of these systems to address the resolution of the public complaints.

Following are different characteristics of the public complaints:

All of the above could be easily done with BPM solutions. I shall be writing more on how this could be done in later posts.