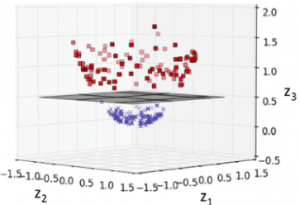 In this post, you will learn about what are kernel methods, kernel trick, and kernel functions when referred with a Support Vector Machine (SVM) algorithm. A good understanding of kernel functions in relation to the SVM machine learning (ML) algorithm will help you build/train the most optimal ML model by using the appropriate kernel functions. There are out-of-box kernel functions such as some of the following which can be applied for training models using the SVM algorithm:

The following topics will be covered:

Non-linear data set are difficult to be separated using a linear hyperplane. SVM algorithm is related to finding the hyperplane which separates the data based on maximum margin. Thus, the ask is the following:

Is there a way in which a non-linear data set or data set which is linearly inseparable can be represented in another form such that the data becomes linearly separable.

Take a look at the following data set which is linearly inseparable. This is plotted using IRIS data set.

The above data set is in 2-dimensions. And, it is not linearly inseparable in a smooth manner. Can the above data set be represented in the following form by adding another dimension? If it is possible, a hyperplane can be found which separates them clearly.

Here is a great representation in the animation format representing how data in two-dimension gets transformed when moved to 3-dimension. The data set becomes linearly separable after applying appropriate kernel function.

Let’s take a look at another simple example of data in 1 dimension which is not easy to separate and how adding another dimension makes it easy.

Let’s apply the method of adding another dimension to the data by using the function Y = X^2 (X-squared). Thus, the data looks like the following after applying the kernel function (Y = X^2) and becomes linearly separable.

What are Kernel Methods?

Kernel methods represent the techniques that are used to deal with linearly inseparable data or non-linear data set shown in fig 1. The idea is to create nonlinear combinations of the original features to project them onto a higher-dimensional space via a mapping function,

, where the data becomes linearly separable. In the diagram given below, the two-dimensional dataset (X1, X2) is projected into a new three-dimensional feature space (Z1, Z2, Z3) where the classes become separable.

By using the above method, the training data can be transformed into a higher-dimensional feature space via a mapping function,

, and a linear SVM model can be trained to classify the data in this new feature space. The new data can then be transformed using the mapping function and fed into the model for classification. However, this method is computationally very expensive. So, what’s the solution?

The solution is to apply some trick which can avoid the need to explicitly map the input data to high-dimension feature space in order to train linear learning algorithms to learn a nonlinear function or decision boundary.  This is called a kernel trick. One must note that the kernel trick applies much more broadly than SVM.

What is Kernel Trick?

What are Kernel Functions and its different types?

Here is a simple code example in relation to how RBF kernel can be applied to non-linear data set.

Here is the summary of what was covered in this post:

I have been recently working in the area of Data analytics including Data Science and Machine Learning / Deep Learning. I am also passionate about different technologies including programming languages such as Java/JEE, Javascript, Python, R, Julia, etc, and technologies such as Blockchain, mobile computing, cloud-native technologies, application security, cloud computing platforms, big data, etc. For latest updates and blogs, follow us on Twitter. I would love to connect with you on Linkedin. Check out my latest book titled as First Principles Thinking: Building winning products using first principles thinking
Posted in AI, Data Science, Machine Learning. Tagged with Data Science, machine learning.