You are at:Home»Web»AngularJS»Angular 2 – Components Explained with Code Examples
By Ajitesh Kumar on February 24, 2016 AngularJS, Web
This article represents concepts and code samples around Angular 2 Components which resides at the heart of the Angular 2 framework as like Controller/Scope which resided at the heart of Angular 1 app. Please feel free to comment/suggest if I missed to mention one or more important points. Also, sorry for the typos.

Following are the key points described later in this article:

Components are at the heart of Angular 2 apps. A component in Angular2 is used to represent a View along with associated logic (encapsulated as a Class), which will get executed based on interaction with that view. Additionally, a component could call/invoke one or more services which can be “dependency injected” into it. 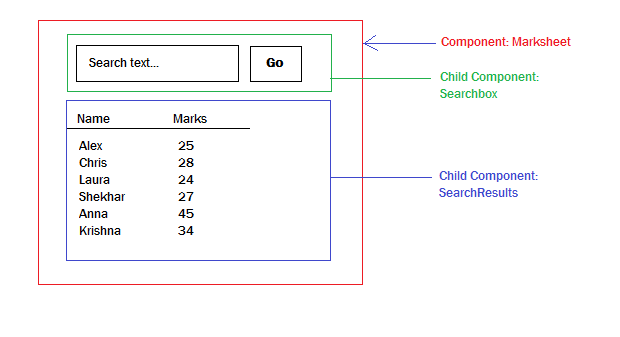 In above app, following could be observed:

A Component in Angular2 is associated with a View and a Class encapsulating the business logic. Take a look at following code sample for a component written with TypeScript language: